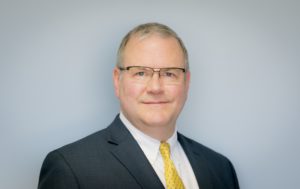 Wes Kozeny is an attorney and entrepreneur that bridges the divide between legal requirements and business exigencies.  He is also an active mediator and participant in the joint landlord tenant mediation program sponsored by USA&M, EHOC and the St. Louis City and County Circuit Courts.  He is a founding partner of Kozeny & McCubbin, LC and Insight Title Company as well as a technology company, KMC Information Systems, LC.  In addition, he founded a national nonprofit organization, the American Legal & Financial Network (ALFN).  Over his career, his law practice has included representation of both plaintiffs and defendants in litigation and different constituencies in non-litigation transactions and disputes.

Practice areas for Wes include banking and finance; commercial and residential real estate transactions, landlord tenant matters, construction and other disputes; title disputes and litigation; creditors rights; enforcement of mortgages and deeds of trust; bankruptcy and insolvency; business formation, governance and other matters; contract disputes; mergers and acquisitions; partner disputes; employment law; federal laws and regulations governing the manufacture and sale of firearms.  Wes served on the Board of Directors of ALFN from its founding in 2002 through 2016 and as its President/CEO from 2013-2015.  The technology company which he founded developed a law firm practice management system (CaseAware) which was initially used by his firm and quickly established a nationwide customer base of law firms.  Throughout his career, Wes has been a regular speaker and has published many articles directed to the mortgage banking industry.  He has learned during his career that the law guides us and finesse is required to successfully apply the law to achieve practical and sometimes creative results.